Do you have a large number of Chromebooks to deploy for your school district or enterprise?

If so, you’re probably researching your options — and possibly reeling from the cost of a white-glove service or from the knowledge base you need to have to be able to do it yourself.

Let us put your mind at ease.

There’s another way — Go-Box — and it’s easy on your brain and your IT budget.

This guide will answer your questions about Chromebook deployment and will walk you through the best way to deploy Chromebooks so you can get the job done as quickly and painlessly as possible. 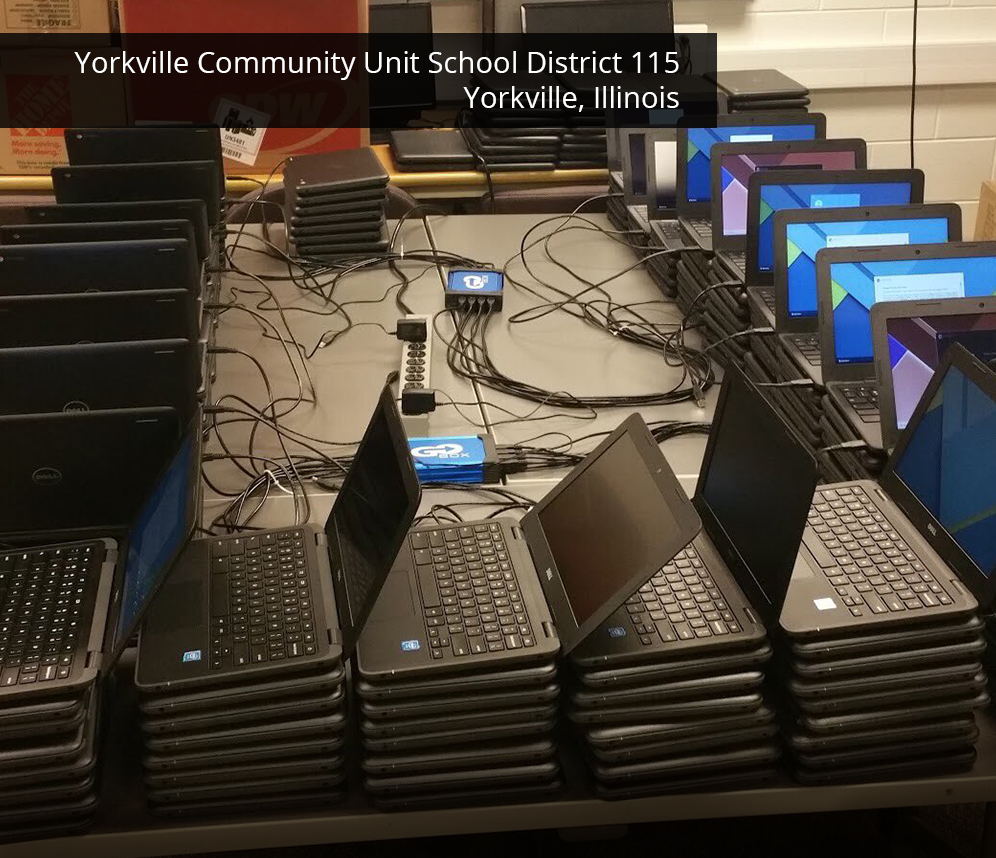 Go-Box has solved mass Chromebook deployment with a simple tool that allows you to establish your own in-house “white-glove” enrollment program.

This one-time investment solves the problem of how to enroll a Chromebook fleet year after year while saving an astonishing amount of time and freeing up your staff.

Compatible with all Chromebook models, Go-Box:

When Does Chromebook Deployment Typically Happen?

Every brand new Chromebook arrives with only the general operating system.

In this state, the Chromebook is ready for individual use or deployment, to be joined to a school’s domain.

What Is the Ultimate Goal of a Chrome Enterprise Deployment?

The process of Chromebook deployment is to get each Chromebook into the school’s domain and the Google admin console.

Once there, it can be both seen and managed by the school’s IT department.

Chromebook deployment installs all the needed settings and controls, along with the right organizational unit, which allows it to have access to certain things or to be locked out of certain things.

The ultimate goal of Chromebook deployment is the management of all the Chromebooks under the purview of the IT department in the school district or enterprise.

How Do You Deploy a Chromebook?

To deploy a Chromebook, you will need to follow these steps:

To properly set up your account, you will need to do the following:

Once your selected settings have been set and verified on the Chromebook within the organizational unit, you may replicate those settings across the domain.

Typically most organizations choose to go with the defaults, but the following popular customized settings are also available:

The first thing you will need to do when undertaking the process of setting up wireless for a school or business is to be certain you have adequate Wi-Fi coverage throughout the building, along with sufficient internet bandwidth so each of your devices will be able to properly work online.

This is particularly important in high-density areas, such as a school or corporate setting, where many Chrome devices are being used at the same time.

You will want to test the Wi-Fi coverage and density to determine whether additional access points may be needed. This may be done via a third-party Wi-Fi analyzer app on an Android device.

Next, you will perform a wireless infrastructure and topology survey of each building before deployment to ensure adequate Wi-Fi coverage.

You will want to be sure to conduct the following:

Be sure that each Chromebook has the needed access to required URLs, including the Google Network.

Taking the time to properly evaluate and prepare your network infrastructure is key to ensuring the best experience for your users.

On an individual basis, each Chromebook must be …

… to be joined to the domain and receive Wi-Fi settings and configuration access to operate in the desired environment.

The most straightforward way to execute Chromebook deployment on a single Chromebook is to go through each of the steps of the operating system to enroll it into the domain by:

You then will complete the process by potentially adding the asset ID and the serial number, if they have been enabled.

Once completed the Chromebook is then:

Thus you have completed Chromebook deployment on a single Chromebook.

But what do you do if you have an entire fleet of Chromebooks needing to be deployed?

Do you just repeat the above scenario over and over for hundreds or even thousands of Chromebooks?

In this scenario, the simple Chromebook deployment process for a single Chromebook, which takes 2 to 3 minutes by hand, is now upped to 4,000 to 20,000 minutes.

On such a large scale it can take weeks to get the Chromebook deployed and up and ready for student use — and nobody has time for that.

Obviously, the best option for multiple Chromebooks is the implementation of a mass Chromebook deployment.

What Is the Best Way to Deploy Chromebooks?

By now it’s clear that mass enrollment is the best way to deploy Chromebooks.

But how can you implement mass Chromebook deployment without overworking your IT department or breaking the budget?

Options to Automate Your Chromebook Deployment

If you make the obvious choice to automate your Chromebook deployment, you have a couple of options including:

As we’ve talked about above, a school or organization that is planning to enroll a thousand — or more — Chromebooks at once needs to have an efficient way to get the job done.

An Arduino chip is an easy-to-use microcontroller and can help simplify the process by sending out the same mouse and keyboard commands each time towards a single Chromebook that it is connected to.

… to get it to spit out commands to walk you through the process of mass enrollment.

Here are some things you will need to know before taking the Arduino chip plunge:

What frequently ends up happening is this:

Schools will pay a third-party provider, also known as a white-glove service, to handle the Chromebook deployment process.

While this sounds like a great idea, the challenge with white-glove services is that they are extremely expensive.

You are paying someone to do the arduous, lengthy process and they are charging you a hefty fee.

Let’s do the math.

Say a school district has 1000 Chromebooks.

And that doesn’t even include the initial cost of the Chromebook purchase.

Plus, a white-glove service is a one-time fee with no ongoing value.

That’s a huge output of money just to get:

The fact is, most school districts have much better ways to spend an IT budget than on a pricey, one-time white-glove service. 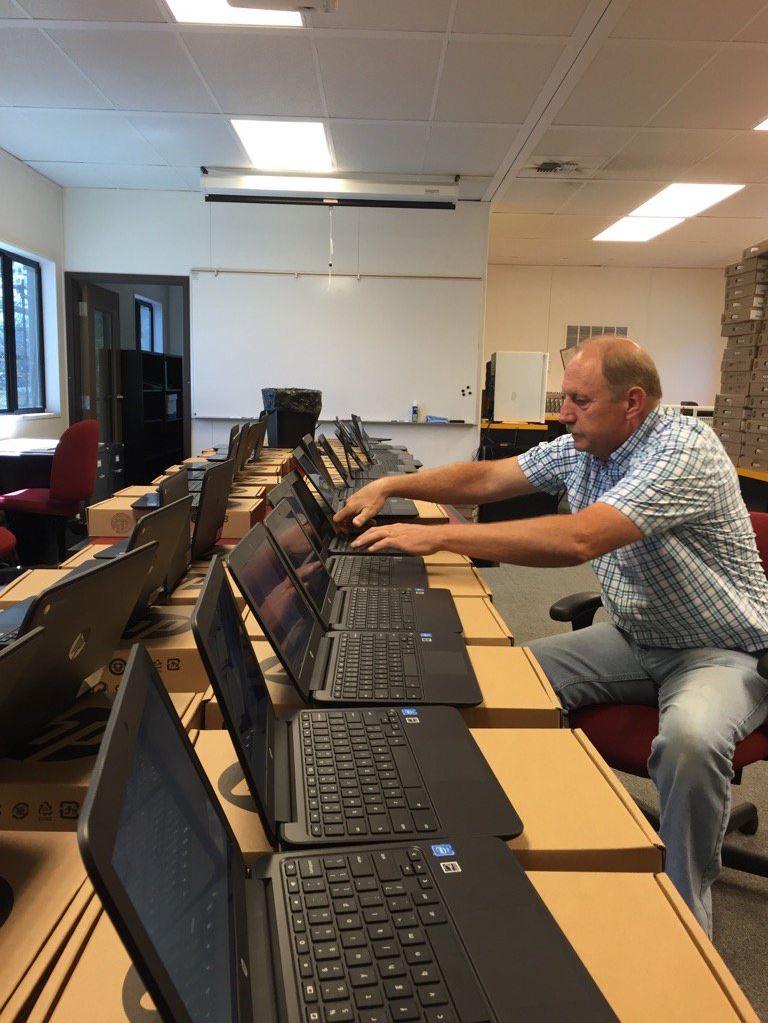 If you are looking for the best way to deploy Chromebooks, Go-Box wins hands down.

Go-Box is your in-house automation solution for Chromebook deployment on large numbers of Chromebooks.

Go-Box is cost-effective and is the perfect choice for 1:1 Chromebook programs.

You’ll be glad to hear that Go-Box eliminates the time issue with its capability of configuring 16 devices at the same time — in just 90 seconds.

As a part of the Chromebook deployment process, Go-Box automates each of the steps, including:

Plus we have a team of top-notch professionals that troubleshoot for a living.

To reach out to our support staff, simply shoot us an email or schedule a support call.

Or, if you’re the DIY type, you can check out our library of comprehensive articles.

Whichever way you choose, the Go-Box staff is with you in the trenches to get you the help you need – fast.

Automate and Expedite Your Next Chromebook Deployment With Go-Box

Which would you rather do?:

Go-Box has simplified mass Chromebook deployment with an easy-to-use tool that lets you establish your own in-house “white-glove” enrollment program.

A one-time investment, go-Box solves the problem of how to enroll a Chromebook fleet year after year while saving an impressive amount of time and freeing up your staff.

Go-Box automates the entire Chromebook deployment process. Our one easy to use tool allows your team to:

And unlike the other mass enrollment solutions, Go-Box is a long-term investment.

Go-Box can be used year after year.

It is a fast and easy solution to enroll a Chromebook fleet.

Get Go-Box through your preferred technology reseller or request a quote for your organization today.